Memcached, a system of distributed memory caching, is often used to increase the performance and availability of the hosted application through decreasing database load. It creates a common cache for all the application nodes and represents your application’s short-term memory.

Let’s find out how the memory allocation in Memcached works and in what way can we get rid of memory fragmentation while using BitssCloud Cloud hosting.

The Memcached system uses the slab instead of the item-by-item memory allocation. As a result, it improves the usage of the memory and protects it from fragmentation in case the data expires from the cache.

Each slab consists of several 1 MB size pages and each page, in its turn, consists of an equal amount of blocks or chunks. After every data storing Memcached defines the data size and looks for a suitable allocation in all slabs. If such allocation exists, the data is written to it. If there is no suitable allocation, the Memcached creates a new slab and divides it into blocks of the necessary size. In the case you update the already stored item and its new value exceeds the size of the block allocation, it was stored in before, Memcached moves it to another, suitable slab. 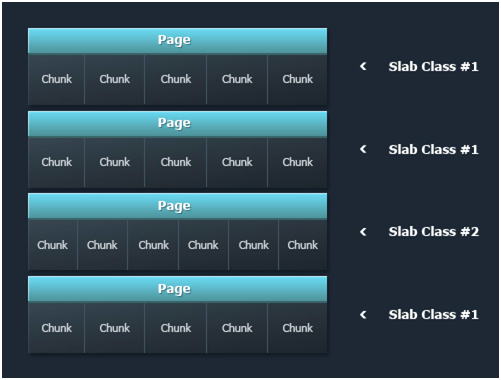 As a result, every instance has multiple pages distributed and allocated within the Memcached memory. This method of allocation prevents memory fragmentation. But on the other hand, it can cause a waste of memory if you do have not enough amount of items with equal allocation size, i.e. there are only a few filled chunks on every page. Thus one more important point is the distribution of the stored items.

With BitssCloud you get the possibility to modify the slab growth coefficient right during your application is running. For that click, the Config button next to the Memcached node, navigate to the conf directory and open Memcached file. Edit it, e.g. in the following way:

In this example -f 2 specifies that you will see 14 slabs with the doubled size of chunks, and the value after the -n defines the minimum space allocated for the key, flags, and value.

We’ve got the following results:

Now let’s enter the default settings again and check what values we’ll get:

Also, you can add the -L parameter to increase the memory page size and in such a way reduce the number of TLB misses and improve the performance.

Thanks to this easy and straightforward optimization we can improve the usage of the allocated memory.